A research work has been carried out on the subject of immigration in Chile and what xenophobia means.

For La Huella Teatro it is important to take this issue due to the contingency that it has today in Chile and the world, to talk about the border, the territory and its anthropological behavior.

Immigration in Chile corresponds to the displacement of various foreign communities to the country. The Chilean population has received immigrants mainly from Latin America, Europe and the Near East during the 19th and 20th centuries.

Currently, immigration from neighboring countries to Chile is the most important, and since 2004 it has increased by 50% to mainly from Peru, Argentina, Bolivia and Ecuador.

The reactions of Chilean citizens to immigration received by the country are diverse and similar to those of other countries receiving immigration. For certain groups, the growth in the number of immigrants represent a problem, because there is a popular belief that their immigration restricts nationals’ job opportunities. There have even been attacks on immigrants by xenophobic and racist groups and individuals.

On the other hand, there are other groups that consider immigration to be beneficial as a form of diversification of the country, also proposing that immigration is a natural demographic process of the human being and that Chileans have also emigrated for various reasons throughout history.

Raquel Mateluna is in charge of supplying El Sendero, a border town with a single mission: to fight the threat of immigrants who want to get to the city.

In the midst of a singular celebration, the woman will be surprised by a controversial discovery, a dying foreigner has crossed the barrier and hides in her food cellar.

The play is Raquel’s desperate attempt to make a decision, but it is also the inevitable reunion with her own story; internal journey that will make her recognize herself in the dying body and be moved by the vulnerability of human beings.

The unipersonal, presented as a vehement dialogue in the voice of Raquel Mateluna, is the metaphor of a society that must ask itself what to do with immigrants? 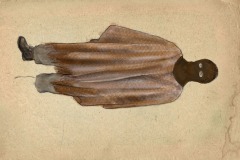